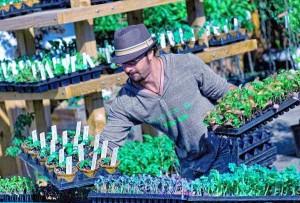 I met Farmer D almost a year ago when he showed up at a community garden installation I was doing for Fiskars’ project Orange Thumb. He was still around as the day was winding down and so I made a point of saying hello to him. At the time, I had no idea who he was. But it didn’t take long for me to find out this guy was into gardening, farming and sustainability in a very big way.

I learned that he was hosting gardening and farming spots for the Mother Nature Network, internet video series along with many, many other projects. At the time, Growing a Greener World TV was only an idea in my head but I knew that if it ever came to fruition, I’d be contacting him to tell his story to a national audience; not that he needed any help with that!

Farmer D is making the rounds these days. He’s designed and installed some pretty swanky gardens in resorts around coastal Georgia and elsewhere. His most recent project is with billionaire Richard Branson of Virgin fame. Daron is designing and installing a farm to table organic garden at Mr. Branson’s fancy resort in New Jersey.

In my role as Executive Producer and host of Growing a Greener World, I come across a lot of great stories. One of our hardest jobs is narrowing down the episodes to the best stories. Although we’ve already come across a bunch of Farmer D types, Daron is the real deal, which is why we featured him for an entire episode.

This is a guy who in college, realized what he wanted to do and pursued it with a passion, even creating an academic series of study that didn’t yet exist at his Wisconsin college. Fortunately his professors were open to Daron’s ideas and he never looked back. Interning, volunteering and working for minimal wages, Farmer D as his mother then nicknamed him, racked up years of experience, culminating in the purchase and successful endeavor of taking on his own 170 acre farm and CSA. He eventually sold his farm to concentrate on his new passion of biodynamic farming in Georgia.

With as much involvement as anyone I know in organic and sustainable gardening and agriculture, I was still unable to tell you exactly what biodynamic farming means. And I’m still not sure I can give you the best explanation. But after spending the day with Farmer D, his approach to a more holistic method to his farming and gardening practices has created an appeal for his business, his brand and his presence that keeps him in high demand. Yet in spite of his busy life, he still finds time to volunteer countless hours to the many area schools that crave his gardening programs. 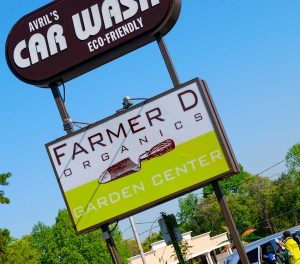 Farmer D’s base camp for all his business is his small but sheik urban garden center in Atlanta, Georgia. All the plants sold are supplied by his certified organic growing partners. And you won’t find any weed and feed, synthetic pesticides or Miracle-gro inside his shop either. Everything he and his Abercrombie, twenty-something, highly educated and qualified staff sell are the supplies to promote the natural and biodynamic style of gardening he so enthusiastically encourages. His laid-back demeanor and unpretentious style bode well in the hip store he shares with his dad’s car wash business. As Daron says laughingly, only here can you get your car loaded with dirt and then have it vacuumed out when you come back!