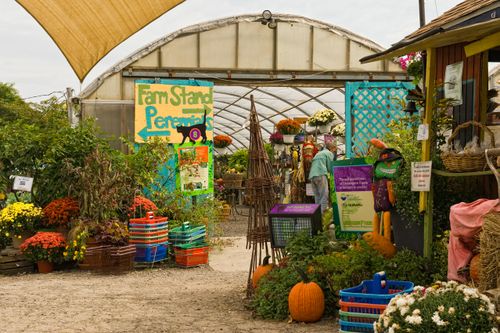 Hard to believe, but nearly a year ago I assembled a very impressive pool of talent from Boston, Atlanta and Philadelphia to converge on Greensgrow Farm, nationally recognized as the leader in urban sustainable farming. Its location is just three miles north of downtown Philly, barely noticeable amongst tightly packed row houses that surround it.

Until then, I hadn’t know about Greensgrow Farm, but I did know about its co-founder and chief farmhand, Mary Seton Corboy. We had worked together when she guest-hosted with me on a another show a couple years ago. I was impressed with her then, but now I know why I felt such a deep admiration for this woman. 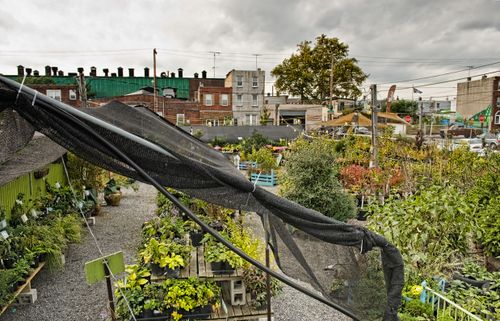 Just over 10 years ago, Mary was in search of a place to cultivate locally grown lettuce to supply area chefs and restaurants. With such a high demand and limited supply, the idea was a sure winner…if she could just find something close and affordable. The site she found was hardly the type of location you’d expect for growing organic fruits and vegetables. You see, the one-acre plot of land was a former galvanized steel plant, now abadonded as an industrial brownfield. What would stop most people dead in their tracks didn’t faze Mary. She saw the potential, rolled up her sleeves and went to work. 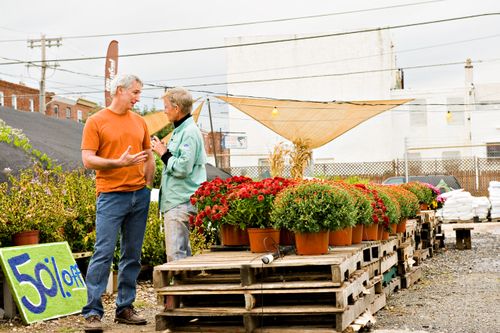 Since this plot of land Mary chose to call home was unfit to plant her lettuce directly into the ground, she developed a system for growing her lettuce hydroponically, above ground and without soil. Her makeshift troughs were rain gutters. In short order she perfected her system and soon her customers were clamoring for other varieties of Mary’s delicious produce. Since not every crop is best suited for hydroponic growing, she had to find a way to utilize this finite space in a more traditional way. So she trucked in many tons of organic soil and loaded it into very deep raised beds. Soon she was not only supplying her clients with a wide variety of fruits and veggies, her bumper crops allowed her to open her business to her neighbors and community. Area residents quickly ventured into Mary’s tiny farm. On Saturdays, they would snatch up the fresh in-season produce and fruit; for many a novelty as such a treat is uncommon and unavailable in urban neighborhoods such as these. 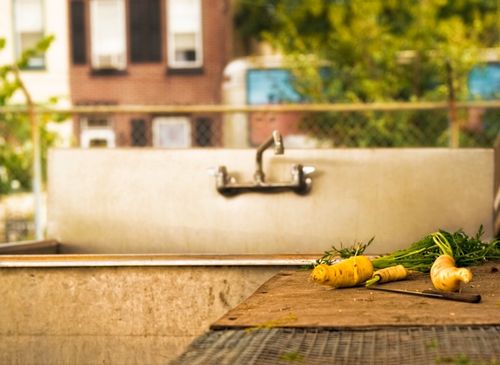 It didn’t stop there. Rural farms and orchards just outside of town began supplying many of the edibles Mary was unable or simply didn’t have the room to grow. And from that, her “City” Supported Agricultural co-op was born. Similar to a traditional “Community” CSA, Mary likes using her version to emphasize the symbiotic link between urban dwellers with the local growers in neighboring rural communities.

And while all of this is going on, Greensgrow successfully manages to make their bio-diesel that fuels the big yellow delivery truck. The raw material is spent cooking oil from area eateries; a resource that is in no short supply! Adjacent to the fuel making operation lies a dozen or more honeybee boxes, filled with combs and oozing with honey. The bees are an important component to the success of Greensgrow’s bounty. In such an intown setting, attracting sufficient quantities of pollinators can be a daunting task. But with these happy hives, there is a plethora of pollinators and an abundance of honey. So much so in fact it too is sold at the weekly farm stand under the label Honey from the Hood.

As excited as I was to see all that was being accomplished with limited funds, space and human resources, there was still more. Between the beehives and bio-diesel, a lush and lovely living roof covered the large storage shed. Its purpose, in addition to being beautiful to look at, was to capture and retain rainwater, reducing runoff, sequester carbon and return oxygen, reduce the heat island effect and promote biodiversity. Not a bad use of space and something we could all do at our homes and businesses. 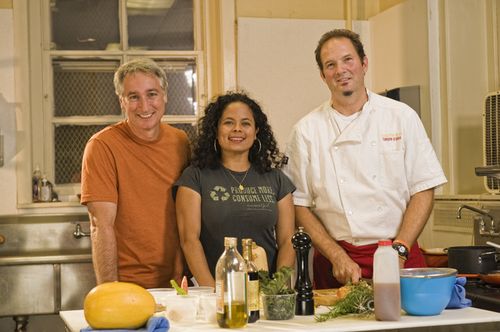 Finally, there was the community kitchen. Located at a church just down the street, Mary has arranged for Chef Corbin Evans to teach local residents everything they need to know to cook and prepare delicious meals and extend the menu with fresh in-season produce. It’s the culmination of the complete cycle and a wonderful example of sustainability in action.

You can likely understand my infatuation with this urban agricultural wonderland and why I was so excited to be there for the location of my first episode and pilot of my new series. I’ve always wanted a forum to tell stories of people, places, and companies that are doing their part to grow a greener world. I’d say Mary and her small but talented staff are prime examples of that! It just goes to show you, abandoned land only is only unproductive if you choose to leave it that way!
JL