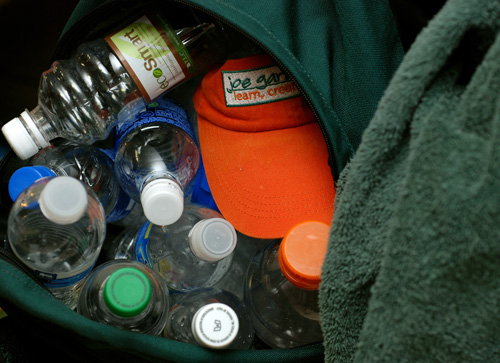 Four days ago, I threw out a ‘tweet’ on Twitter regarding my crazy idea to install an organic Victory Garden at my house, sufficient to feed my family of four over the entire summer, and spend less than $25 total! Sound ridiculous? Some people think so, yet the overwhelming response to the idea was an enthusiastic thumbs up!

Since then, I’ve been obsessing on how to actually pull this off. I realize my biggest expense will be all the ‘stuff’ I’ll need to get the seeds started properly, like those mini greenhouses to hold in moisture, not to mention the special soil and even the seeds and containers to grow them. It all adds up so quickly! Where will I find all of this without blowing through my budget in the first few days?

But have you noticed that once you set your mind to something, things that you never noticed before suddenly become apparent? That happened for me this morning, while partaking in my 5:30 spin class. To take my mind off the misery of fatigue and exertion (niiice), I pondered where I could find everything I need for this project without buying any of it. My eyes (when they finally opened) happened to gaze upon the stray plastic water bottles lying about. The light bulb went off.

There’s my first idea of the morning. In addition to the spent toilet paper rolls I’ve amassed for seed starting, here’s another option. I’ll gather up all the discarded bottles from the gym, haul them home, and cut them down to size while tossing the top parts into the recycle bin. It didn’t take long to fill my workout bag with abandoned and discarded bottles. Don’t people know they’re supposed to recycle these things? Just for now, I’m glad they haven’t. 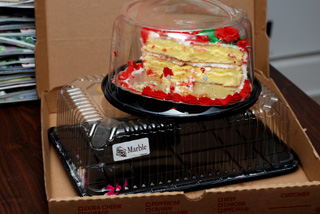 As soon as I get home, I get my next idea. This time it’s for the mini greenhouses I need to germinate the seeds properly. We had been celebrating my oldest daughter’s birthday all weekend, so multiple store-bought cakes were involved. Did you know those cakes come in recyclable mini greenhouses? Now I’m on a roll. I’ve already decided to hit the grocery store manager later today and see if I can get him to donate a few more of these disposable cake thingamajigs (that’s actually a word in spell check by the way).

We also ate a lot of pizza this weekend. Those boxes are just the right height for loading with soil and planting a few seeds as well. Even better, after I transplant the seedlings from them into the garden, I'll toss the boxes into the compost bin. You can't do that with plastic seed trays.

I also have an idea for other seed and soil options. In addition to the very generous offers I’ve received from my friends on Twitter, I’m going to contact the Master Gardener groups in my area and see if I visit their next meeting, tell them what I’m doing and tap into their excellent resources. Keep in mind, the goal here is to equip and grow out this garden with less than twenty five dollars and without using things I personally already have as it relates to all of this. My intention is to show that anyone, especially the new gardener tight on cash and short on equipment, that it can be done!

Tomorrow, I’ll post the rules of the game (as I know them so far) on how I plan to pull this off and to give you some guidelines, should you decide to take the challenge as well. I’ll continue to post on my daily struggles and victories and I’ll start including almost- daily-videos within this blog later next week. If nothing else, these next few months should prove to be entertaining but I suspect it will far more than that.
JL