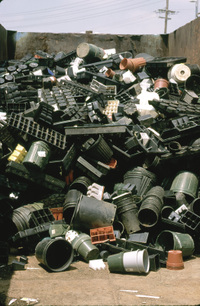 The EPA has reported that, of the nearly 27 million tons of plastic generated in the United States during 2003, only 3.9% of it was recycled, and very little of that was garden-related. Unfortunately, gardeners are in for a long wait before horticultural plastic is widely accepted for recycling by processing facilities.

Most municipalities lack the resources to manually separate the pots that can be recycled from the many more that can’t. Manufacturers, growers and nurseries have yet to seriously consider a uniform standard for recyclable containers, and with many variables and competitive interests to consider, finding an acceptable solution will be difficult.

Yet in the midst of this less-than-encouraging news, positive things are happening. In 2007, the Missouri Botanical Garden’s Plastic Pot Recycling program successfully recycled over 100,000 pounds of horticultural plastic originally destined for landfills. With the cooperation of seven local garden center drop-off sites, they’re taking on their most ambitious endeavor this year – a goal of collecting and recycling a record 150,000 pounds of plastic.

The MOBOT recycling program was started in 1997, thanks to a plethora of pots piling up in Dr. Steve Cline’s garage. Steve is the program’s founder and Manager of the William T. Kemper Center for Home Gardening. Since then, the program has collected and prevented over 300 tons of horticultural waste from going into landfills. The Garden’s successful program in St. Louis is the most extensive public garden-recycling program in the United States. Last month, they received the Award for Program Excellence from the American Public Gardens Association in recognition of their innovative and pioneering spirit.

Elsewhere, a group in the nursery and landscape industry is making a concerted effort to consolidate horticultural container sizes in an attempt to simplify the recycling process. The group will go before the ANLA Senate next month to start the ball rolling on this campaign. Although I applaud their efforts, standard sizes will have little effect on the bigger problem.

I believe the answer is to standardize the materials used to make the containers, so they’re all recyclable – no matter what the size. It will no doubt take cooperation from many sides. Our industry does great things to beautify the environment, but it needs to eliminate the impact left behind in doing so. Now is the time, and the issue is on the table.