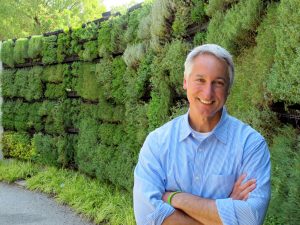 On occasion, some of the best segments that make it into our shows were never part of the original outline. Perhaps I shouldn’t admit that, but this blog is about going behind the scenes, right? I’ve also learned that this can actually be a really good thing sometimes and that Team GGW is pretty darn good in a pinch. Such was the case for the DIY Pallet Garden scene for this episode.

After two great days of filming the core subjects for this show in New England and a tight outline that we followed to the letter, we should have been finished with a complete show. But once in a while things don’t work out exactly as planned. When it was all said and done and a preliminary edit complete, we still had about a three-minute hole in this show. Even worse, the finished episode was due to APT in just over a week. So now what?

This is where I tell myself not to panic. As calmly as I can (I’m getting better at this), I email our writer, Robin Haglund with an SOS with our dilemma. Although vertical gardens are really catching on, they’re not yet as common as the backyard vegetable garden. So now that we’re all back in our respective cities, where do we go now and what to show and talk about that relates to what we’ve already shot. It’s not like we can take this in a completely different direction. It has to tie into what we’ve already done, AND we need to be able to get there quickly. In other words, we need some fast thinking and a lot of luck to make this happen like tomorrow! 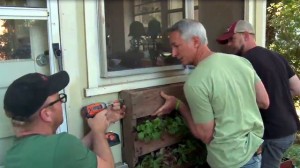 Putting together a pallet garden with Monty and Kai

Within a few hours, Robin emails back with a list of options, all of which have potential. But one seemed perfect. She had some friends that recently moved from Los Angeles to Asheville, NC and had a small house that they were looking to fix up. What if we built a small vertical garden on their patio wall using a pallet?

The idea was brilliant! In doing some quick online research, Robin came across a post by our mutual friend Fern Richardson and her awesome blog, Life on the Balcony. In the post, she demonstrated how she created a pallet garden on her balcony. It was beautiful, simple, inexpensive and best of all, doable! 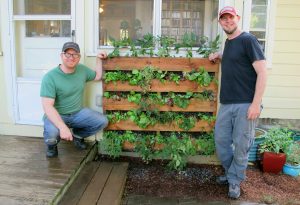 Monty and Kai with their new pallet vertical garden! It’s all greens, vegetables, and herbs

Done deal. This was a no brainer. Asheville was only a two-hour drive away, Robin’s friends, Monty and Kai were totally game and this could happen quickly. Within a few days, we were on location and building our garden. Thankfully, this was one of those days that just worked. The light was good, sound wasn’t an issue (as it often is when you’re in a hurry), and the setting was perfect for the story. The guys were ideal as well since both came from a TV and film background (having lived in L.A.) so they totally knew the rigors of production on a deadline. 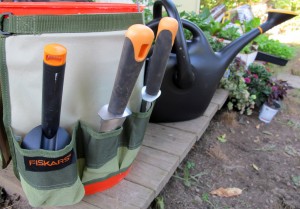 Tools for any garden, big or small!

In real time, the entire garden took less than an hour to construct and mount. It was super easy to build, inexpensive, and totally fun to do, especially with some help. And in the end, it really looked great! So a special thanks to Robin for her brilliant recon, Fern for posting this fabulous idea on her blog and Monty and Kai for your willingness, accessibility and gracious hospitality in making this happen so quickly!

And my take-away on this is yet another reminder that if you keep the faith, everything really does work out and life is good.

If you want the complete step by step plans, here’s how we built this pallet garden.

Watch the full episode this post is from, Episode 221: Living Walls.

Here’s Fern’s post when she built her pallet garden and where we got our inspiration. Thanks Fern!