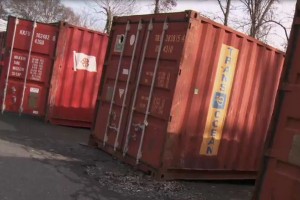 You would never guess that inside these used shipping containers are high-tech hydroponics systems growing organic food!

I have to admit, of all the types of gardening I’ve tried, hydroponics is actually not one I’ve done yet! I guess I’m just a hands-in-the-dirt kinda guy. But all of the people we feature in this episode have created a fantastic niche with hydroponics, perfecting the practice of growing plants completely without the presence of soil.

When I first stated working on this episode, I contacted Demetri Hubbard, a hydroponics expert I worked with when I was hosting Fresh from the Garden on DIY Network. He was our go-to guy then and I knew if I could still find him, he’d be my go-to guy now. Good thing I did. We filmed some great shots in his Atlanta store Atlantis Hydroponics to introduce viewers to the ABC’s of getting started with a home system, and then he told us about his “High Tech Farmer” friend, Matt Liotta and his very cool PodPonics system. 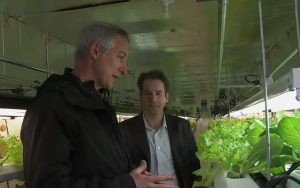 With a tech savvy background, Matt has developed a cutting edge system of growing edibles hydroponically in used shipping containers. The highlight for anyone seeing this PodPonics system for the first time is the revealing peek inside. From the outside, you’d have no idea that each container is outfitted with enough high-tech equipment to create the perfect controlled indoor growing environment. Moreover, the containers are configured to equate to the growing space of an area much larger if cultivated outside.

The beauty of such a system, besides a pest and disease free environment is that just about anybody, anywhere, can now grow amazing edibles. It’s ideally suited for urban restaurants that want access to the freshest ingredients but don’t have the soil or sunlight to grow edibles any other way. And the taste of the lettuce we sampled that day was amazing; buttery, fresh, crisp, sweet—like nothing I’ve ever had before. And the highlight of this day was harvesting some of that lettuce for a special salad prepared by Chef Jay Swift, of 4th and Swift, one of the hottest restaurants in Atlanta. In the spirit of not wanting anything to go to waste, Nathan and I devoured all of it during the several takes shot for the close of the show. Why can’t all closes be this delicious? 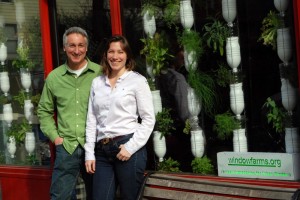 With Britta Riley of WindowFarms.org

A few days later we flew up to New York City to film another segment for the show featuring Britta Riley, a landlocked twenty-something that yearned for homegrown fresh greens. I discovered Britta’s YouTube video last winter and thought her idea was so cool, we just had to figure out a way to feature her. Although the economics of justifying sending the crew and myself to NYC for one three-minute segment might be second-guessed by some, it’s finding and telling these stories that makes us who and what we are. I wouldn’t have it any other way! 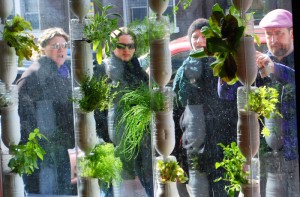 Unwilling to settle for less-than-fresh, imported, store-bought herbs and veggies, Britta developed a hydroponic system using soda bottles for growing those edibles in her apartment window, right in the heart of the city. Her Windowfarms™ system is now feeding not only her own desire for homegrown greens, but people all around the world as well.

In fact, Windowfarms™ have become so popular that Britta has turned her idea into a fulltime business with employees, and an uber cool storefront office where she and her team ship kits far and wide.

My hat is off to these young eco-entrepreneurs who really are making some very innovative strides at growing a greener world, even when what they’re growing is the only green around!

Watch the episode I’m talking about here at Episode 206: Hydroponics.