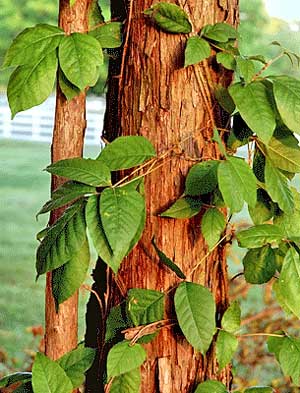 Rhododendron, Philodendron, Toxicodendron; I’ll gladly take the first two, but something about that last one sounds a bit ominous, don’t you think? That’s because Toxicodendron is the plant genus to three of the most hated plants in North America, specifically poison ivy, oak and sumac.

Nine out of ten of you reading this, likely feel the same way that I do about this group, collectively referred to as poison ivy. We have already suffered multiple allergic reactions during our lifetime and more instances are likely to follow.

For those of you yet to experience this misery, don’t gloat…your time may still be coming. In fact, only one percent of the U.S population is considered truly immune. You can’t get the allergic reaction to poison ivy on the first exposure. Although it may happen on the second encounter, most of the time, it is years of repeated, mild exposure that ultimately leads to that ‘first time’ outbreak.

Unless you live in Hawaii, Alaska or parts of the desert, at least one of these plants grows in your state. Poison Ivy is usually found east of the Rockies while poison oak is most common up and down the west coast and southeast. Poison sumac is common along the eastern states.

Regardless of what you call it, these plants pack a powerful punch. The active ingredient that leads to days or weeks of itching, oozing blisters is urushiol (u-ROO she-ol). It’s located in the sap of the plant. Simply brushing up against an intact plant won’t cause a reaction. That’s the good news. The bad news is that the plants are very fragile. The slightest abrasion from insects, animals or even the wind can release this toxic oil.

The good news is you must have direct contact with the oil to have an outbreak. The bad news is urushiol is a highly persistent oil. It can remain potent for years – even on dead plants! Although avoiding direct contact is a great first defense, it’s not a guarantee that you won’t still get it. Because the oil easily sticks to everything that touches it, this high mobility makes even couch potatoes vulnerable.

If you happen to handle a garden tool, a ball or toy or even a pet that has made direct contact with the oil, you can get it too. Ironically, most animals, including cats and dogs are not allergic to urushiol.

If you suspect exposure, the oil can be removed from your skin if caught in time. The earlier you can cleanse the exposed area of urushiol, the better chance you have of avoiding an outbreak. That’s the good news. The bad news is urushiol can penetrate the skin in as little as five minutes. The sooner you clean the exposed skin the better your chances of avoiding a rash.

Fortunately, over the counter solvents are an effective first step at removing the oils. They are applied liberally to the affected area. In the same way, common rubbing alcohol is also effective at stripping the oil when applied to the affected area. Unfortunately it’s also very effective at removing your body’s protective layer as well. Any additional exposure the same day will enable the urushiol to penetrate your skin twice as fast.

Next rinse your body thoroughly with water only. Then shower with soap and water. Clothes should be washed immediately in hot water and any tools, shoes or equipment should be cleaned as well with rubbing alcohol. Be careful when handling these items and wear gloves that can be disposed of after use.

Once you get the rash

The first signs of an outbreak occur about four to 48 hours after exposure. Redness of the skin and swelling are the first symptoms, then comes the blistering and itching. As tempting as it is, avoid itching your rash. Contrary to popular believe, although the itching won’t spread the rash, bacteria beneath the fingernails can lead to infection.

Severe cases that include infection over 30% of the body, or rashes on the face or genitals are treated with oral prescription steroids. Otherwise, there are several over the counter products that are designed to relieve itching and dry up the oozing blisters.

Some of the most common, readily available aids for treating the symptoms include corticosteroid creams such as hydrocortisone, Calamine lotion and antihistamines such as Benadryl. Untreated, the rash will usually clear up on its own in about two to three weeks.

The fastest way to eliminate the poison ivy is to pull it out from the roots. Of course most of you right now are thinking I’ve lost my mind. But no I haven’t. However, you will need to wear protective gloves, as well as clothing that will cover as much of your skin as possible.

Soak the entire area where the poison ivy is growing with water to make the soil soft. Use a shovel or fork to turn over the soil and pull out the roots. Discard the vines and roots in a large plastic garbage bag.

Inevitably there will be some roots left that will re-sprout; hit these new sprouts approximately two weeks after they appear with spray with glyphosate (Roundup or Ortho’s Kleeraway Grass & Weed Killer), or triclopyr ( Ortho’s Brush-B-Gon Poison Ivy Killer). Mix these products as directed on the label. It may take more than one application before the entire plant has died.

If you’re highly allergic or just can’t imagine getting close enough to actually handle these plants, use any of the chemicals listed above and spray the plants several times until they eventually die. This is one of the rare exceptions where you’ll see me suggest the use of chemicals as a first line of offense.

Lastly, never burn poison ivy. The oils can be carried in the smoke to affect your body and there is the added risk of it being carried into your eyes, nasal passages, mouth and lungs!

Clearing up some Misconceptions

Scratching the rash does not cause it to spread. The urushiol oil that causes the itching is not contained in the fluid of the blister. Nor does the poison ivy rash spread through the bloodstream. It is only active where the oil penetrated the skin.

Poison ivy is not contagious from person to person. It is only be spread by direct contact, but that may include secondary contact, i.e. petting an animal that has the oil on its coat.

Although the old expression “leaves of three, leave them be” is good advice, poison ivy has three leaves, poison oak has three to five and sumac has seven to 13.

If you’d like to read more about my personal encounters with this torturous beast, including my most recent experience of how NBC concealed it on my arm during The Today Show, check out my blog post of 6-20-07 at joegardener.com/blog