This behind-the-scenes post is by Co-Executive Producer, Theresa Loe. 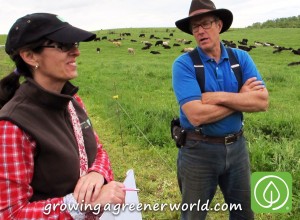 It was definitely a “white-knuckler” as we barreled down a Virginia dirt road in the pitch darkness of the early morning. I’m sure Carl (our director) and David (camera 2) were double-checking their seatbelts in the backseats. It’s not that Joe Lamp’l isn’t an excellent driver – he is – especially when we have absolutely no idea where we are going.

But on this morning, a heavy downpour of rain made it impossible to see past the hood of the car. The darkness and farmland roads just made it worse. I was in the navigator seat trying to give directions to Joe from a printout and also an iPad that was losing its signal. Although I had been there before, the rainy country roads were all starting to look the same in the headlights. Hey wait, that forked tree looks familiar… 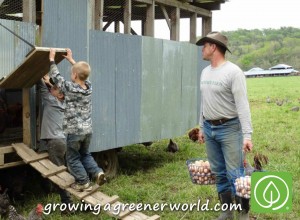 We were traveling to film Joel Salatin of Polyface farm and we had to be there before the sun came up so we could capture the morning chores. I was especially excited about producing this episode because I have been a fan of Joel’s for years. He became a household name after being featured in The Omnivore’s Dilemma, Food Inc. and numerous other books and movies.

Why all the hype around one Virginia farmer?

Because Joel and his family farm the land in an ultra-sustainable way that heals the soil one acre at a time. Farmers across the country are following his lead to not only produce food in an ethical way, but to restore the soil at the same time. (To learn more about the Polyface system of farming, you can read my blog post here.) 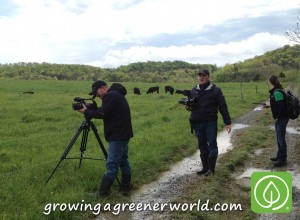 The rain stopped just in time for us to begin filming!

I don’t know how he did it, but on that rainy morning Joe managed to get us to Polyface on time and in one piece. Our production assistant Laura was already there with coffee. Whew! Even Joel Salatin was impressed, saying that film crews rarely made it that early on the first day.

Within minutes of arriving, we were off and running. The sun was going to be up soon and the farm was already a bustle of activity. The farm apprentices were in the fields. Daniel Salatin (Joel’s son and farm manager) was in the store boxing up the day’s restaurant deliveries and Joel was already suited up in rain gear to move the chicken mobiles (large movable chicken houses). 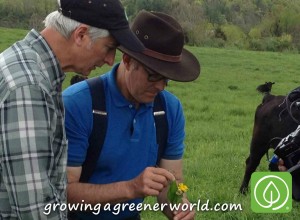 Luckily, the rain stopped just as we were ready to turn on the cameras and we had two full days of beautiful weather. Only the wind gave us technical trouble (but it usually does).

From sun up to sun down, we followed Joel, his son Daniel, Daniel’s two young sons, and all the apprentices who work the farm. We hauled equipment through the muddy fields and rode in the back of Joel’s 4×4 truck over most of the property picking the most beautiful spots for our interviews.

Choosing beautiful spots to film was only difficult because there were so many to choose from; the entire property was lovely. 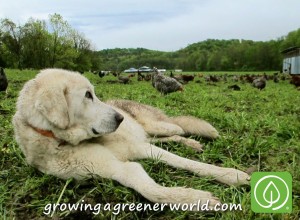 This is Michael, an Akbash-Anatolian Shepherd mix

Our constant companion while at Polyface was the farm dog, Michael. He is an Akbash-Anatolian Shepherd mix, a special breed known for being a nocturnal guard dog who will watch over farm animals but is also people-friendly. Although he would plop down and fall asleep every time we stopped (after being up all night on duty), he was a real charmer.

Spending several days on Polyface Farm and talking for hours with Joel Salatin about his philosophies and farming methods was very enlightening. But the highlight of the visit for all of us was the privilege of eating several delicious meals in the Salatin home, cooked up by Joel’s wife Teresa. The food was amazing and the time spent in the Salatin home was one of the most special moments in our GGW production history. We very much enjoyed their hospitality and fellowship. 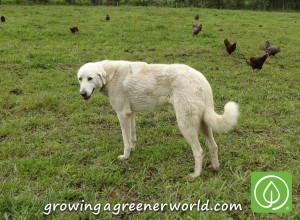 We really appreciate that the Salatins opened up their farm and their home to us so that we could make this episode. We hope you enjoy the finished project!