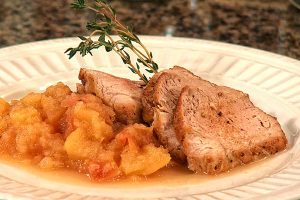 In a medium (3 quart) pot over medium heat, combine all of the ingredients. Seriously. Just dump it all in. Cover with a lid, bring to a boil, then reduce to a simmer, and cook for approximately fifteen to twenty minutes, stirring occasionally. Now, it’s going to look a bit like apple soup. Not to worry. Simply get out the potato masher or a stiff whisk and mash/whip/whisk to your hearts content, or until your desired texture is achieved. I, myself, like a few chunks in my fresh, warm apple sauce. If you prefer a smooth texture instead, (could happen) simply process with an immersion wand, the same way as if you were making a soup.

Season the tenderloin with the salt, pepper and cumin. Allow to sit at room temperature for at least 15 minutes. Meanwhile, preheat the oven to 350°F. Heat a medium oven-safe sauté pan over high heat until hot. Add 1 tablespoon extra-virgin olive oil, swirl the pan, and heat until the oil is shimmering/smoking. Immediately add the tenderloin and allow to cook for 1 minute, or until nicely seared/colored.

Set the digital thermometer to 145°F for a little bit of pink (the way I like mine. Otherwise set it for 150°F for less pink). In my oven (depending on the thickness of the tenderloin, give or take a few minutes) it usually takes approximately 13 to 15 minutes to reach 140°F. At which point remove the tenderloin from the hot pan and transfer it to a cutting board to rest.

By allowing the tenderloin to rest after removing it from the oven, the internal temperature will continue to rise, and will eventually plateau (mine hits 152 after 5 minutes). It will then begin to fall (148° after 10 minutes) which means that the juices are beginning to stabilize. Then when you cut into the tenderloin, all of those wonderful juices will remain in the meat, and not be lost to your cutting board. Serve thinly sliced tenderloin with a tasty scoop of spiced applesauce, and enjoy!