Pruning. It’s often feared to a fault. In fact, I have a good friend that is a self-proclaimed “prunaphobic”. On the other hand, some people think nothing of shearing off shrubs since they are clueless to the adverse cause and affect of their actions. Then there are others that seem to have too much time on their hands. They’re the ones that create geometric shapes, usually in order to cover up the fact that what they planted is too big for the location. The gumball, triangle or cubed hedgerow is often the result. 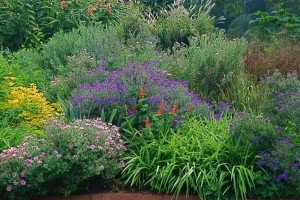 You should know that I’m a big fan of pruning and I love to do it myself. I understand why it’s needed (to control shape, encourage more growth or blooms, or improve health). With the proper knowledge, pruning is good for your plants and shrubs, even trees. Just ask Tracy DiSabato-Aust. She’s spent many years studying the cause and effect of pruning perennials. She didn’t get the nickname of “Tracy Scissorshands” for nothing! She’s the author of the best selling book; The Well Tended Perennial Garden. Just know that if you ever go to visit Tracy, brush up on your botanical Latin first. It rolls off her tongue like butter and adds a hefty dose of credibility to what she does with a pair of pruners.

On the day we showed up to tape our segment with her, we arrived an hour early for the shoot. Normally that shouldn’t be a problem but considering it was only 6:45 AM when we showed up, we caught Tracy still in her workout clothes and feeding her animals. She’s a world-class triathlete so she has a lot going on. Obviously her days start very early and this was no exception!

But as expected, we learned much this day on a few of the many reasons to prune and how it can work to increase the number of blooms, delay flowering, or improve the overall health of the plants. She’s a wealth of knowledge and experience and we were happy to showcase her great skills. 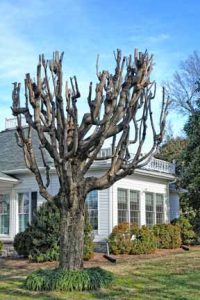 Topping a tree will surely lead to its untimely death

Now, if you really want to know what ticks me off, try topping your trees! In stark contrast to the many benefits of proper pruning, tree topping is the biggest crime against horticulture there is. And in my town, it is rampant! I hate tree topping.

How it became such a popular and ongoing thing to do, I’ll never know. But I suspect, some bozo with a chainsaw and pickup truck goes around and tells Mrs. Jones it’s time to top her trees. Somehow he convinces her it’s a good thing to do so she allows the mutilation and ultimate death of her trees, at the hand of some ignorant chainsaw wielding idiot!

Even worse, as a herd mentality, all her neighbors do it too! Can you tell I hate tree topping? I had no shortage of examples to show when we drove around one morning in my town to shoot this segment for the show. My only regret is that we didn’t shoot this early in the year so you could see the real mutilation and disfiguring that occurs when those guys go around and mangle those trees. Just so you know, if you do this, your trees will eventually die. If you need more information, click on the link to my article on tree topping. 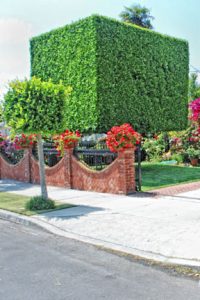 When it comes to shaping a plant, beauty is in the eye of the beholder

This is a sticky wicket for sure! Our guest on the show for this segment was Billy Goodnick. He’s a Landscape Architect and garden writer with a real aversion to shearing plants, shrubs and trees into unnatural forms. I share his disdain. But after his shoot in L.A. for our segment, his Facebook post received quite a bit of commentary and controversy. Some of the comments and rightfully so, felt we were poking fun at people who happened to have a different opinion on what looked good when it comes to the shape of their plants.

As the producer who needs to remove his personal opinions, this troubled me a great deal. Although I don’t like cubes and gumballs on plants, it’s not my place to say someone else is wrong for doing it in their own landscape. Ultimately, I had to make the decision to remain neutral on this one so as not to appear condescending of someone else’s choice for how they design their garden, assuming their decisions do not harm the health of their plants.

Anyway, if I’ve been a little too wordy, here’s the bottom line: Tracy’s a pruning genius, “prune” your shrubs however you like, as long as you’re not harming their health, but don’t ever, EVER top your trees. Because if you do, with rare exception, you’ve just sentenced them to a slow death.