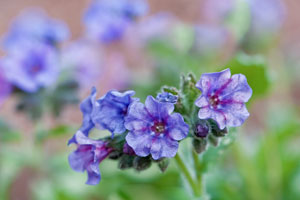 With few choices for colorful flowers in the shade, Pulmonaria performs like a champ

In my zone 7 garden, I’m always rewarded in very early spring with a neon display of petite flower blooms from my lungwort (Pulmonaria) plants, scattered throughout the garden. One of my favorite varieties is E.B. Anderson. The electric blue flowers, even though small, have power in numbers. They stop me in my tracks every time. This is a great trait considering these perennial plants perform well in full shade. Combine light, spotted semi-evergreen foliage and you have a plant worthy of every garden.

Pulmonaria varieties are numerous, with suitable choices for virtually all parts of the country. For years, they were either loved or hated. Those dissenters had a disdain for the ever- present powdery mildew and self-seeding with abandon characteristics. Fans saw past this and appreciated lungwort for the contribution it made to a shady site and for the rewards of being one of the first to appear above the snow in late winter. And, it didn’t hurt that this plant is deer resistant.

The name alone is a story. This plant gets its name from the characteristic spotted foliage of the leaves. Centuries ago, if a plant looked like a body part, it was often used for medicinal purposes. Since the foliage looked like a diseased lung, it was thought to be a cure for pulmonary ailments. So, the genus is named pulmo, which is Latin for lung. Wort, which means flower, completes the link. And there you have it: Pulmonaria, also known as lungwort.

Pulmonaria are native to many parts of Europe and Asia. All grow best when given light shade and a few hours of morning sun. Sites that are too sunny or hot will cause this plant’s foliage to deteriorate rapidly. They perform at their best at higher elevations and cooler temperatures. Their preferred soil is rich in organic matter and moist but not wet. In fact, soil that is poorly drained, or allowed to dry out will cause this plant to languish. I have found that my plants look better when divided every few years, in early fall.

For those who have turned their back on this plant due to their tendency for powdery mildew, it is time for another look. Thanks to plant breeders around the country and studies such as Temple University’s on mildew resistance, there are varieties available today that show a higher level or resistance, including Pulmonaria ‘David Ward’, ‘Redstart’, ‘Excalibur’, and ‘Spilled Milk’. But don’t stop there. With the many choices today, there are likely Pulmonaria varieties that grow and perform well where you live.