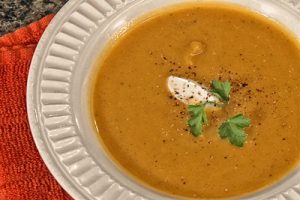 Using a vegetable peeler, remove the skin of the squash, cut in half and scoop out the seeds. Cut the squash into one inch pieces. In a medium pot over medium-low heat, add the butter, three tablespoons extra-virgin olive oil, sage, cinnamon, red pepper flakes, and the onion. Season, and cook until lightly colored, (three minutes).

Add the squash, the apples, plus four and a half cups stock, and bring to a simmer. Reduce the heat to a low simmer, then cover, and cook until the squash is tender, (thirty minutes). Using an immersion blender, add the remaining two tablespoons extra-virgin olive oil, and puree until smooth.

Add the remaining stock to thin, if desired. Season to taste with the lemon juice, Kosher salt and freshly ground black pepper. Garnish with a dollop of crème fraiche, black pepper, and parsley.

Grab yourself a clean container, with a lid, large enough to hold about three cups of liquid. Stir to combine the two cups of heavy whipping cream with five tablespoons buttermilk then pour into the container. Rest the lid loosely on top, allowing it to breathe, and set someplace (not in the refrigerator) for twelve to fifteen hours, undisturbed. I put mine on a shelf. The cream will thicken with time. That’s it.

Crème fraiche stored in the refrigerator, with the lid on tight, will last about three weeks. I like to make creme fraiche in the evening, then by the following morning, it’s ready to use on waffles, or drizzled over fresh fruit. Or, that evening, add creme fraiche to thicken soups, because unlike milk, it won’t separate when simmered.