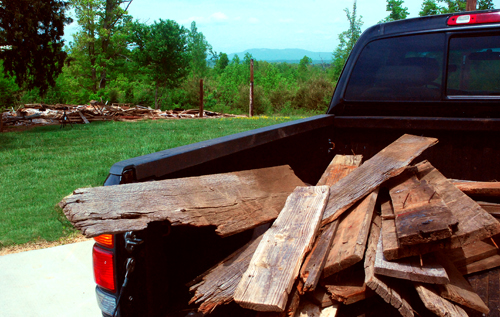 Freecycle.org comes through again. So far, it’s helped find a taker for my Nandina plants I needed to have removed to make room for my Twenty-five Dollar Victory Garden, and someone else to come take away a truckload of gravel mulch. Today (finally) I found my source for free wood to contain my raised bed.

I live in North Carolina and I see old abandoned barns just about every day. They’re the kind of barns that have that really have that old weathered wood and you just want to go exploring it or at least take pictures because they always have so much character. Well today I received a Freecycle.org email notice of someone that had torn down one of these old barns and was offering the 110-year-old wood to any takers. 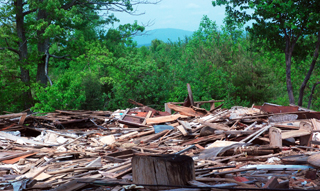 I emailed him immediately and within minutes he called me. An hour later I was rummaging through a pile of wood that looked like the remnants of a tornado’s direct path. I knew before I even left the house that the best pieces had already been picked through but I thought I might at least find a few good pieces. At this point I was willing to take the chance. My garden bed is ready and in immediate need of containment. And since I can’t afford to buy lumber on my twenty-five dollar budget, this was the best (and only) option I had.

As you can see from the picture above, I managed to recover a few garden-worthy pieces. It was quite an experience and I chuckled at the steps I’ve gone through already in pursuit of my Twenty-five Dollar Organic Victory Garden Challenge. Today was a great example of that as I carefully attempted to avoid the many exposed rusty nails and broken glass, along with the snakes, black widows and who knows what else. But in the end, I had my free wood and I’m one step closer to containing my soil in my new garden bed. So thanks again Freecycle.org. And just for the record, I’ve still only spent seven dollars so far.
JL

p.s. Earlier this evening, we had on heck of a downpour. And no, I have not removed the wood from my truck yet. I hope my garden hasn’t washed away yet. I’ll report on that later. By the way, wait till you see the video I shot today of my salvage efforts at this old barn.