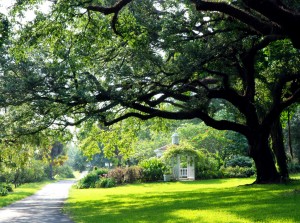 Ahhh, the majestic tree. I may hug it.

God has cared for these trees, saved them from drought, disease, avalanches, and a thousand tempests and floods. But he cannot save them from fools. John Muir

So here’s the backstory to this episode on the Celebration of Trees. It’s pretty simple actually. I love trees. I love everything about them. I even celebrate the mess they make each fall because I know how much good the leaves do for my garden.

I’m not much for bumper stickers and signage on my cars, but there is one thing that I proudly display in the form of a sticker on my windshield and it’s simply says this: “Trees Are Good”.

As much as I am a fan of trees, I hate what some people do to them; specifically tree topping—that horrific practice of just cutting across the canopy of mature hardwood trees – in the name of “tree care.” It’s one of the most damaging things that can be done to a tree and yet – I cannot fathom why – it is a rampant and accepted practice in some areas. 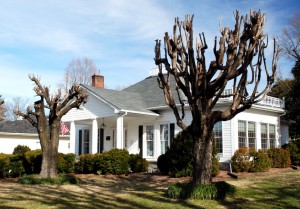 Mature hardwood trees, senselessly-butchered by the practice of tree-topping. Even if the trees live, they'll never be "right" again.

I’m sure it’s a combination of Johnny Chainsaw with a pickup truck telling Mrs. Jones it’s time to top her trees again. So she does. And then Mr. Smith does it because Mrs. Jones did it, and so the neighborhood wave starts.

In my town, the ripple effect has spread far and wide. Fortunately this terrible practice seems to be confined to certain parts of the country, namely the southeast and northwest, but you’ll find pockets of them all over. And once you notice your first crime against horticulture in the form of tree topping, you’ll notice many more after that. 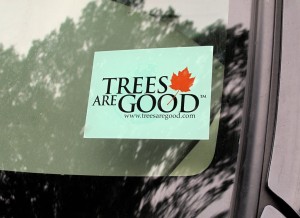 So, armed with a national television show and a vehicle for getting into every home in my town and every town across the country, this episode was created in part to educate people on exactly how much harm tree-topping does to the trees and warn them off of any “professional” services who recommend it. And second, I think trees are all too often taken for granted, and this was a chance to not only talk about the do’s and don’ts of tree care, but also just why trees are so important.

This was the first episode we filmed over nearly an entire year. It was the best way to show you the different tree-related topics in real time, with video, rather than just inserting photos from the various seasons. It’s not the GGW way. I’m a big believer in not taking life’s shortcuts. And with television production, yes, everything takes longer and usually costs a lot more. But in the end, it’s always worth it. So this episode is dedicated to celebrating trees and all they do to literally grow a greener world—and cheer the people who really know how to take care of them, while shedding light on those who don’t!

Watch the full episode now – Episode 212: The Gift of Trees