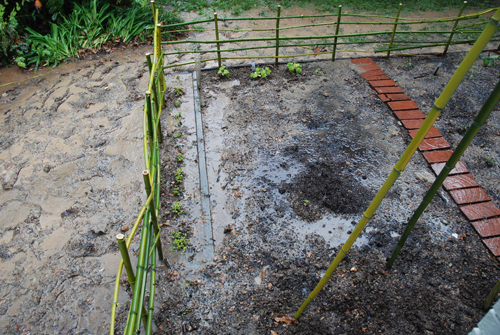 I never thought as a gardener I’d be saying this but I am SO sick of the rain!!! Just as I placed my soil into my new garden spot, down came the rain. In fact, the first night, three-inches fell on my exposed, bare soil. I hadn’t even had a chance to contain it yet with raised sides. I was convinced I’d come out the next morning to a total washout. But much to my surprise, the garden bed had faired pretty well. That was five days ago. Since then, it’s been off and on (mostly on) rain since then for a total of over five inches.

I’ve worked non-stop to install the boards for the sides to retain the soil, created small brick pathways within the bed, and even harvested bamboo for a small fence and for the supports for my pole beans. I’ve planted seedlings that I’ve been growing indoors over the last six weeks and even managed to sow a few seeds. But for most of this time, I’ve either been working in the rain, or working in mud, neither once I’d consider to be very fun. Unfortunately, I really do feel behind schedule right now so the pressure to move on is adding to the frustration. I’m leaving Wednesday for a few days and I really wanted to have everything planted or sown by then so I could feel good about being away. But Mother Nature has other plans. I hear the forecast is for more of the same for the rest of the week!

I promise to have a few videos up by Friday since I won’t be working in my garden! I’ve got quite a backlog at this point that simply needs to be edited to catch you up to speed on where we are in the process. By the way, the picture above was shot about an hour before this posting. This is a sneak peak at the corner of my new garden but I’m not showing you any more of it at this point since I have a few more reveals to bring  you in the upcoming videos first.

Lastly, I had to spend $2.27 today for some twine to lash my bamboo poles together and I may use it to reinforce the bamboo fence as well. This brings my total expenses so far to $9.27.

You can expect a couple more videos by the end of this week.
JL