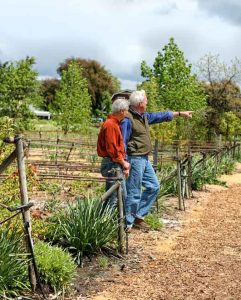 After seven years of traveling the country hosting gardening television shows, I have to say, this day was the best day ever so far. In that time, I’ve seen the most incredible gardens and toured some amazing places, but who would have thought, the best day would be one spent in a worm farm? But never did I expect to have a day so fun that none of us wanted to leave, long after the work was finished.

My trusty and talented Associate Producer, Theresa Loe had scouted sites for this episode months earlier. And every time she made the inquiry for a place we should feature in northern California that specialized in worm compost, The Sonoma County Worm Farm was the answer. Over the ensuing weeks, Tloe (our nickname for her) had numerous interactions with the proprietor farmer, Jack Chambers. Yet telephone calls and emails can’t do justice to the warmth and hospitality that we experienced upon our arrival. 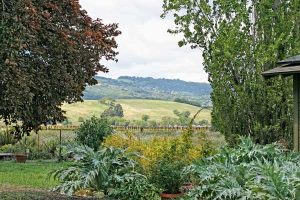 Jack’s ‘day job’ is with Delta Airlines as a 747 Captain to far away lands. On the day we met, he had just returned from an eight-day trip, traversing the pacific six times. In spite of his admitted jetlag, you would have never known of his fatigue. Jack along with his gracious wife Lois and lovely adult daughters Amy and Nicole made us feel like family from the moment we arrived. After a quick walk around the old farm and a lay of the land, Jack escorted us into their home where the ladies had been working hard to prepare the most amazing lunch. Homemade gourmet pizzas and a fresh marinated chicken salad that would make Martha Stewart jealous, we feasted like royalty.

This was the most loving, happy family and their warmth was instantly contagious. The hugs, smiles and laughter never ceased. As we sat around the table, about to break bread, Jack shared a family tradition with us. Any time friends, family or new guests gather for a meal, Jack selects and reads an appropriate selection from a book entitled “Prayers”. Ironically, the one he chose for us had never been bestowed on any other visitors and I found it quite appropriate for our day of adventure with new friends:

The Prayer is from ‘Graces’ by June Cotner 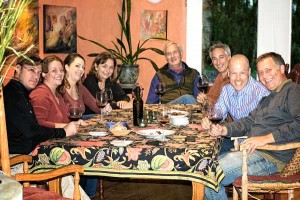 Sharing a special time together around the table

Sing for joy in summer When earth is bright and green. Sing with fun in winter When snow is velveteen. In spring sing out with gusto For the life to soon unfold- And sing with zest in autumn For the woodlands colored gold.

With full bellies and the clock ticking, we still had an episode to shoot and I as the producer was feeling rather anxious to get going. We were already four hours behind schedule and we had to complete this show before we lost daylight about four hours later. But our host had other plans. Before we were excused from the table to tend to our business, Jack made sure we had each told our personal story. This man was truly interested in people and it was clear that he invested much of his life in cultivating relationships.

Just as Jack so intently engages with whatever is before him, we went to work and completed our television assignment with no time to spare, in part due to the requisite reinforcements of lattes, ginger snaps and brownies served by the ladies at our four o’clock break. Apparently, they didn’t get the memo that we don’t even break for lunch on most shooting days, but no one was dare going to utter a word today. Somehow, we’d find a way to finish on time. 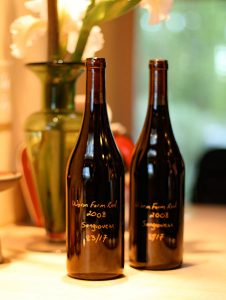 The reward of a long day

Although I needed no additional motivation to make sure we completed our segments, on this occasion, the rewards were even greater than simply completing another marathon at a demanding pace. This time, it was a chance to reconvene with the family over a setting sun and some fabulous wine from their adjoining vineyard.

As evening turned to night, just like all good things, this time had to end too. Reluctantly, we packed our gear, shared more hugs and promised to return. And return I will. You see, each October, they host a harvest party from their vineyard to rave reviews. And if today’s visit is any indication of what they can do with some real planning, how could I possibly miss that?