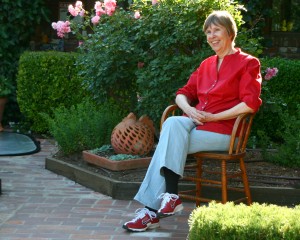 Ros and her red shoes regale us with stories

Over the last two seasons of Growing a Greener World, we’ve covered some cool topics and interviewed some pretty amazing people along the way. But this show was a first. In one episode we featured not one but two legends of food and gardening.

One of the hottest trends in gardening today is edible landscaping, and the person credited with pioneering this movement some 30 years ago is Rosalind Creasy. With about as many books penned over the same time, this is a woman who really knows her stuff. And she should – she changes out her front yard landscape from scratch twice each year! About the only thing that doesn’t change are the chickens she keeps in their very chic turquoise coop, in fact the ladies are likely the biggest benefactors of Ros’s edible Eden. Each day, the girls get a wide assortment of fresh fruits, veggies and grasses, all served up within mere steps of their abode. It would be a challenge to find more content and well-fed chickens on the planet. 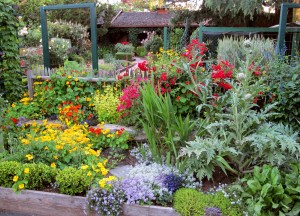 When it comes to gardening with a purpose, Ros gets it. Beyond the beauty that spills from the front door all the way out to the street, there’s a method to the madness. She’s a firm believer that gardens, especially ones that are edible, bring people together like nothing else can.

And she’s had plenty of time to see the fruits of her labor. From the annual neighborhood event of harvesting the wheat she grows street side, to the baking of the bread, all in the same day, Ros gardens not as much for herself but for power it has to enrich lives, strengthen neighborhoods, and build community. 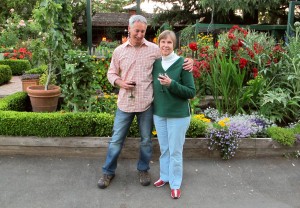 Raising a glass with Ros after the shoot is over

Another person working hard to touch lives in his own community, is still considered to be the world’s most famous chef. And yet, today he shuns the public spotlight in exchange for the sunlight that warms his small backyard Garden north of Seattle. Graham Kerr, known around the world as The Galloping Gourmet, has circled the globe 28 times, sold over 15 million cookbooks, and through television, still appears in over 37 countries.

For someone who has surrounded his life with food, Graham never really had a personal connection to how it starts—until three years ago when he nurtured the growth of seven basil plants from seed. The experience was life changing and he now devotes his time to building community through gardening. 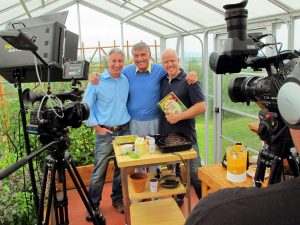 With Graham and Nathan at Graham's Seattle home

As a small boy, I grew up with the Galloping Gourmet in my living room. I can remember is like it was yesterday. So last fall, when Janet Endsley of the Northwest Flower and Garden Show asked if I’d be on a panel with Graham for their show, I jumped at the chance. In fact, I thought how cool would it be to film an episode with him in his own garden. Although I didn’t know his current story yet, his history was more than good enough.

I sent Graham an email to say hello and explaining we’d be sharing the stage together in a few months. I wanted to introduce myself and perhaps mention the idea for a show with him. I left my number just by chance he’d call back. And less than 24 hours later, he did. We chatted for well over an hour. Over the next several weeks we had many similar conversations. Graham has never been at a loss for words, and even today at 78, carries a conversation with ease. 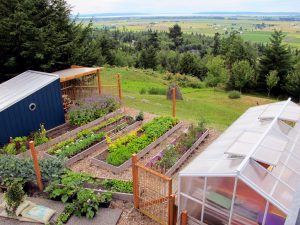 By the time we met in person this January, we embraced like long lost friends and our time on stage together was effortless. Graham is good, really, really good. Now I know what it’s like to be around a true professional.

As warm and charismatic as he is privately, when it’s time to roll cameras, he instantly takes it up 10 levels. It was truly an amazing experience. And on the few times that day of filming we asked him to modify his response, he knocked it out of the park on the first take.

For someone of such international fame, you’d never know it by spending time with him privately. His passion in life now has nothing to do with what happens in the public world. In fact he avoids it. Building community through gardening and food and sharing the experience with Treena, his wife and partner for life, makes Graham a very content man.

We needed to pinch Nathan several times this day

In fact, perhaps that’s what he was doing with us on the day we spent with him. I have to admit, for Nathan, my crew and me, it was a surreal experience; to be in Graham’s personal home and kitchen, helping him prepare lunch for a meal we would all share together and the conversation around the table that ensued was something we’ll never forget.

And I think it’s a safe bet he and Treena made a lifelong impact on a few more lives this day.