Celebrating the Resiliency of Nature on Earth Day 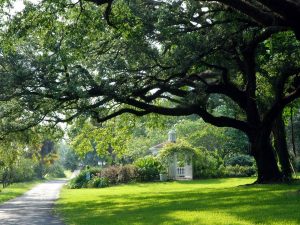 I’m fortunate to have a job where travel allows and even requires me to see many beautiful gardens around the country. But a recent trip to Miami, Florida was extra special. From birth through college, Miami was my hometown. And until this trip, I hadn’t been back for over 20 years.

I credit the origin of my passion for gardening to the amazing growing environment south Florida provides. My earliest memories include breaking off branches from my parents’ prized shrubs (because they were in the way of the secret fort I was building) and then recklessly sticking them in the ground to conceal the damage.

Much to my surprise, nearly every one of those mangled limbs rooted. This was fascinating to me and a big relief as well. It was my defining moment where I became hooked on horticulture.

Having been away for so long, I found my mind drifting back to that fertile, thriving paradise of my youth.

Back then, I wasn’t aware of the incessant challenges to all things growing, brought upon by the pressures of Mother Nature and human influences. But the garden I was touring this day was a living testament to the resiliency of such forces.

It had been hit hard by several major storms in the recent years. And yet, as I toured the grounds and observed my surroundings, what became vividly apparent was that even in the face of utter destruction, life goes on.

Many trees that were blown to the ground and left for dead have made a full recovery, albeit in a non-traditional form. Palms blown horizontally in the high winds remain rooted in the ground and turned skyward at their crowns.

Large portions of roots from ancient trees were ripped from the ground, exposed to light and air. Those roots became shoots, which became new trunks and are now the primary growth, sprouting vigorous new growth and abundant leaves.

And limbs ripped from the trunks of large mango and avocado trees, now mask mangled wounds with calloused-over bark and a thick canopy of foliage, along with an impressive crop of ripening fruit.

Perhaps the most vivid memory now etched in my mind will be the majestic native oaks, the pride of south Florida. They managed to remain standing in many cases, despite total defoliation. Today there is no evidence on these trees of the extreme stress placed upon them only a few years ago.

Even in those cases where older and weaker trees toppled, new life has sprung from beneath. Plants never known to exist in the area were making themselves apparent, now that the canopy above was open to life-giving sunlight and new opportunities.

For a gardener, opportunities from adversity are learned early on. It doesn’t take the evidence of a hurricane to make this known. For others, it may be just this very sort of eye-opening experience to teach them and remind us that life goes on, especially in the resiliency of nature.