This blog coincides with episode 123 of Growing a Greener World. To enjoy this blog post to the fullest extent, be sure to watch the episode online here and listen to my podcast interview with Maria.

The Rodale family legacy; Organic Gardening magazine, founded by J.I Rodale in 1942, Organic Manifesto, Maria’s incredible new book; Demand Organic—her manta and “vote with your dollars”. These are just a few of the things rolling through my head before, during, and certainly after our trip to the Rodale Institute for some one-on-one time with true horticultural heroes of the last seven decades.

Of 26 episodes over the last nine months, telling stories of incredible people, places and organizations doing great things for the planet, Maria and Maya, Robert and J.I Rodale are the poster family for what our series is all about. One family, four generations, one goal: healthy living for a healthy planet. What more could you ask for?

Having an entire day at the Rodale Institute with their full support and access allowed us to tell their story, or at least part of it. With only 16 minutes of dedicated time to the primary subject, how do you possibly cover the essence of all this family has accomplished and the dedication they have devoted to spreading the gospel of organic gardening? You don’t, but you try as hard as you can. That was our challenge. 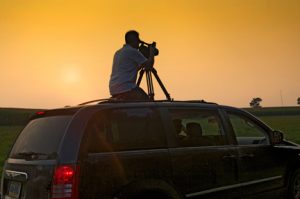 I wanted this show to be all that it had the potential to be. Too often we run so hard, I’m afraid we sometimes miss something. I didn’t want this to be one of those times. We arrived the day before our primary shoot and interviews with Maria and Maya. I knew there was a lot to see and I wanted to capture it all, without the pressure of running out of time. That was a good move.

We got a good lay of the land and wasted no time collecting footage that became the perfect shots to help build the beauty of this place and set the stage for what was to come. We stayed late, rolling cameras as the setting sun dropped behind the orange sky, disappearing behind a vast sea of cornfields. Similarly, the next morning we arrived before sunrise, taking our positions on the highest point on the farm to catch it rising into a pink sky, illuminating the misty and vibrant pond below. It was going to be a very good day. 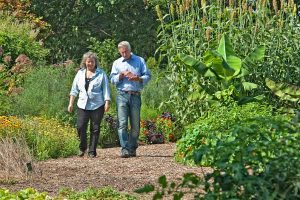 The Rodale team was there in full support, to help our crew document this incredible day. An early morning breakfast of fresh fruit and baked goods was served to fortify us all for the hard pace we’d be running the rest of the day. By 10:30 my interview with Chairman and CEO Maria Rodale was underway. Although we had met briefly a few weeks prior to this meeting, it was like reuniting with an old friend. The questions were effortless and so were her responses. We were on the same page this day, just as we have been for years.

What struck me most in listening to her responses was the true passion that came from her answers. In fact, we learned later when submitting the episode for approval that we weren’t providing enough balance in this story and unfortunately, some of her responses didn’t make it in to the final cut. Fortunately, there are other outlets for this sort of issue, like my podcast interview with Maria. Here, we were able to capture the whole story and make it available for you to hear, without editing and time constraints. What a story! 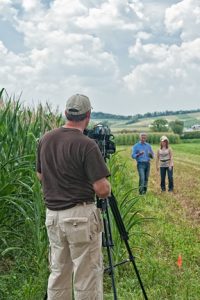 Maya Rodale is Maria’s daughter and the forth generation to carry on the family legacy. Maya has worked her way up through the company starting at the bottom, just like all employees of Rodale. Currently, she is in charge of communications. As you might expect, she is very well versed in her grandfather, Robert’s Farming Systems Trials. Here, he did side by side comparisons of organically grown crops to synthetically managed ones and it’s still one of the largest comparisons of its kind. Maya and I spent a lot of time here. It was amazing to see how organically managed soil holds together so much better, and how the crops respond so favorably to it. There are several scenes in this episode that really highlight some of these amazing differences in support of organically managed soil. 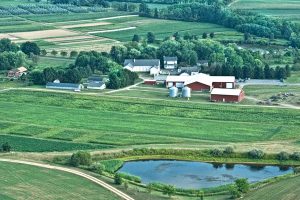 As the day was drawing to a close, we had one more bit of business to tend to. I wanted to capture the beauty of this farm from overhead. The only way to do that was by helicopter or airplane. I had called my associate producer, Theresa Loe the night before and told her we needed a plane the next day to shoot b roll of the farm. So with basically no notice, she secured a plane and a few hours later we were flying over the farm with cameras rolling.

When it was over, I wanted to make sure we did all we could to make this story come to life in a way that impacts others in such a positive and encouraging way as it has for me. Time will tell. But if we make just one change from watching this episode or reading Maria’s book, if we “demand organic” and vote with our dollars, we really do have the power to change the health of ourselves and the planet. And that’s a message we can all live with.