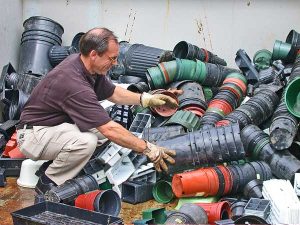 Dr. Cline says the amount of plastic pots that enter the U.S. each year could fill a baseball stadium

For every plant we put in the ground, there’s usually a pot associated with it. From those annoyingly thin plastic, crinkly six-pack containers to the giant buckets that hold large shrubs and small trees, plastic pots play a ubiquitous role as the villain in an otherwise beautiful story of creating great American landscapes and gardens. The sad truth is that very, very few of those containers are ever recycled.

As much as we all talk about doing more for the planet, why can’t an industry whose primary purpose is to help beautify it, unite to come up with a solution to reduce the massive amount of horticultural waste that ends up in landfills every year? Dr. Steve Cline runs the most successful and largest plastic pot-recycling program in the country at the Missouri Botanical Garden (MOBOT). We talked a lot about that very subject. Something as simple as settling on one type of plastic that is readily recyclable would go a long way to solving the problem. Although the industry is slowly making progress, they have a long way to go. And until there’s a better solution, programs like MOBOT’s are the best we can do.

Having spent a day with Dr. Cline and the MOBOT volunteers during our shoot, I learned much more. First, it takes a good deal of money and many dedicated volunteers to run a successful recycling program. As much as I was hoping, it isn’t as simple as parking a dumpster in a nursery parking lot and when it’s full, hauling it away. 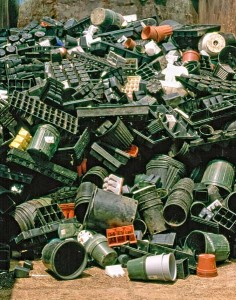 The plastic has to be sorted since the different types don’t mix once they’re melted down. And, the sorting part of the process is very labor intensive. If you’ve ever looked at the bottom of a container, you might be able to see the standard recycling numbers, such as 1, 2, 3, or 5. But in many cases, that number is nearly impossible to see or so small, you couldn’t read it without your strongest pair of glasses. I’m speaking from experience here! On this day, there were many times I simply couldn’t tell what number, if any, was on the container bottom. Why is that? Until manufacturers unite on a universal type of plastic, why at least can’t they make the number legible and positioned on the pot so that one can actually find and read it?

Although I see color-coding as a solution, I doubt this will work since every company seems to want their own branded container but come on guys, there needs to be a compromise here. At least make all the #2’s black, #5’s green, #6’s brown, etc. Give us something we can work with to ease the burden of the labor intensive, manual and tedious sorting process. And because of this, it takes an army of people to sort through everything that comes in. 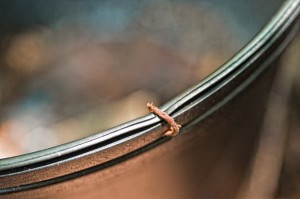 Why not plastic instead of those metal rings a pot has to hold the tag on…which can’t be recycled and really messes up the grinder. Some of the volunteers that showed up to help this day had the sole job of finding and removing those rings by hand, one at a time, usually with a set of pliers or by cutting it from the pot. And the labels themselves; they show up with many of the empty pots but only a fraction are biodegradable.

And one more thing; how about making the pots a uniform size and shape like the one-gallon pots really being one gallon. And that goes for every sized pot out there. It sure would be easier to stack them for storage or in the event they make it to the landfill, they at least take up less space because they are stackable.

But here’s the best idea. Lead by example. We did see some fantastic advances by the industry as they explore alternatives to plastic. William Evans of Fertil USA demonstrated several examples of pots made from material that is biodegradable and or compostable, that works for the grower and the consumer too. We’re very early in the process and the challenges many but at least some are working on it, and that is very good news.