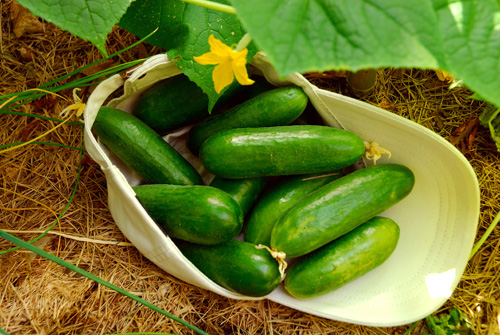 I realize that if I only post a blog entry every time I have a new video to show, you're not getting much action in between in real time. So here's a shot of this mornings surprise harvest of 'green finger' cucumbers, compliments of seeds sent to me by my virtual friend on Twitter, Theresa Loe. These cucumbers are really tasty and I love the size. This is the second harvest from only about two plants. I also love that fact that they don't take up a lot of space in the garden. They're mostly 'hanging out along the front of my bamboo fence. 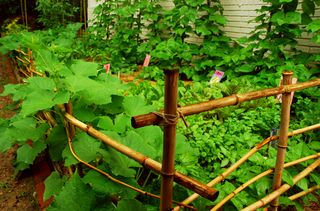 In other harvesting news, some of my squash will be ready for harvest tomorrow. Initially I was concerned that they were not getting pollinated because I hadn't seen any bees out there. So I hand-pollinated all I could. But today I saw honey bees in my garden and I was really excited about that.

Some of the pole beans, Chinese cabbage, chard and lettuce will come in tonight for dinner so now that it is officially well into summer, all the vegetables my family and I eat for the rest of the season must come from the garden. The tomato plants are doing well but I am a few weeks away yet from harvesting any of them.

My plans for the next video are to address the very few pests problems I'd had. Actually, I wouldn't even call them problems. I had a few whitefly and one cucumber beetle. But I feel like I need to addrsess what do do for pest control on a budget so I'm thinking that should make it into episode 12, which I'll edit and upload later this week.

That's all for now. The budget is still holding at $14.55 in total expenses. Now I'm wondering if I can keep it here for the rest of the season. How cool would that be to finish out the season for under $15?!?

If you'd like to see all the videos in this series, The Twenty-five Dollar Organic Victory Garden Challenge, they can be viewed on my channel at YouTube.