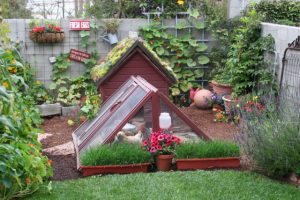 A tenth of an acre may not sound like much at first! But after spending time in the home garden of our associate producer, Theresa Loe, this tiny plot proved more than enough for a bountiful edible garden to feed a family four.

This was my first visit to see Theresa’s (or “Tloe’s”) garden to see it firsthand. I’d heard about it, seen pictures, even a video, but nothing could compare to actually being there! For those that don’t know Tloe, she’s one “buttoned-up” cookie. So I shouldn’t have been so surprised to see how edible and beautiful this back (and front) yard oasis was. All too often, the locations for our shoots are not quite what we had hoped when setting up our episodes and selecting locations. 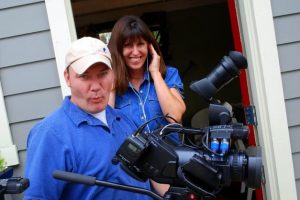 Theresa checks over audio while Carl is... um, I'm not sure what Carl is doing

But in true Tloe fashion, it exceeded any and every expectation I had. Of all people, Theresa knows what qualifies as the appropriate location to carry the show’s theme visually, and shooting in her own backyard, literally, provided her full control to set the stage. This turned out to be a garden of our dreams and we ended up using it as a “set” for several episodes besides this one.

On a related note, I was able to prove once and for all that Tloe is in fact human and not some secret Stepford Wives military project or something. On the day before shooting was scheduled to begin, I sent my camera crew ahead to film background footage for the show. They arrived in Los Angeles with plenty of daylight left and since they were on my dime, I wanted to put them to work. 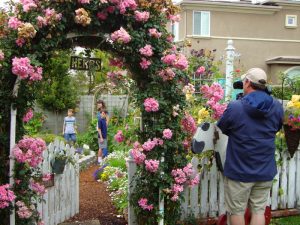 Filming Theresa and her boys in the backyard

As it happens, I failed to notify Tloe of this, and when Theresa opened her door to two cameramen packed with equipment 24 hours early, she was… shall we say… a little shocked. Her garden may have been ready, but she was not!

The boys appropriately passed the blame on to me and I received the well-deserved admonishment… in the form of numerous emails and text messages about the pain and suffering I was about to experience when my plane landed in Los Angeles.

But it was all in good fun. 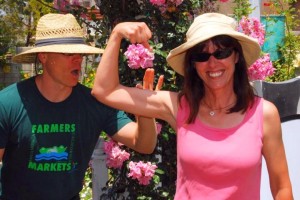 Nathan checks out Theresa's muscles. Those are gardening guns, people!

Being the good sport that she is, Theresa welcomed the boys in and even gave them some coffee and a snack (simultaneously spewing off numerous threatening text messages to me), and that’s just one of the many reasons we all love Theresa so much. Her spunk, attention to detail, and someone who truly walks her talk, is not only an inspiration, but a real gift for all of us that want to learn more about the subjects covered on our series.

Who knows what Theresa did after she sent the boys home that evening, but when I arrived on Monday, and for the rest of the week we filmed there, the garden couldn’t have looked better. Theresa has been “Living Homegrown Fresh” for years, but this gave us a timely opportunity to showcase the concept of city homesteading for a new generation wanting to live off their own land – no matter how small.

The episode was voted by viewers as one of their very favorites, and is certainly one I’ll never forget.