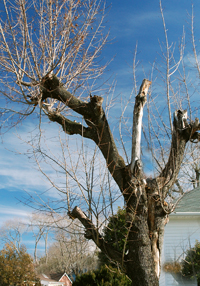 When it comes to gardening and landscaping, I seem to be spending a lot more time telling people what not to do, rather than the other way around. Let’s face it, there’s no shortage of information out there on how to plant a tree, grow a lawn, or prune your roses. But apparently, not enough people are getting the message when it comes to what not to do.

Case in point, this time every year, I get a stark reminder of a problem across the country, but especially in smaller towns like mine. Tree topping is rampant and with no apparent end in sight. Despite numerous campaigns by such organizations as Plant Amnesty, and articles by the International Society of Arboriculture and other credible sources, people still do what they do. In this case, maim, mangle and ultimately kill beautiful trees.

Even when it becomes necessary to prune encroaching trees, there’s a right way to do anything, but coat rack cutting is not one of them. The lead picture in this post was taken before its inevitable demise. Few trees can withstand the incredible stress put on them by such drastic measures, especially when the process is repeated year after year. This tree, like so many others is gone. Only a stump remains, a stark reminder of its fate at the hand of human ignorance. 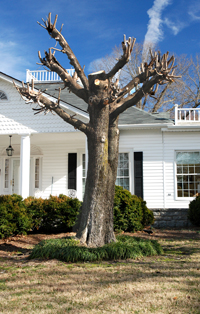 There are so many abuses of tree topping here, I’ve pretty much stopped taking pictures of them. They all are atrocious and equally disheartening to look at. These days, I’m taking more pictures of the ultimate fate of these topped trees once they start coming down. Alone, an image of a stump doesn’t tell much of a story. But when you put that next to the images of the same tree from prior seasons, a story dramatically unfolds.

No doubt, we act in a heard mentality. See one person doing it, then another and before you know it, we’re all doing it, with no real knowledge as to why. Either that, or the guys with the chainsaw and a pickup are great sales people with no conscience. I keep waiting for the opportunity to catch someone in the act of actually committing such crimes against trees so I can ask what they’re rationale is.

So as I try to close out this post on a positive note, let me attempt to encourage sound landscaping practices by saying what should be done; you should…NOT top your trees!

p.s. There’s so much more to say about tree topping and why it’s bad. You can read an article I wrote about that, here.