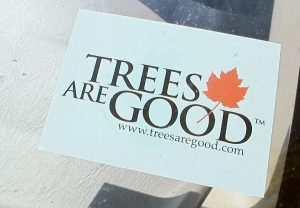 Perhaps the best way to set up the behind the scenes background information for this episode is to first set the stage. For years now, I’ve proudly driven around sporting my favorite window decal: Trees Are Good. It was a freebie handed out by the International Society of Arboriculture but they must have had me in mind when they made them. In fact, I’ve since collected several back up decals of the same when the time comes to replace the windshield or God-forbid the truck.

I’ve loved trees all my life. Simply considering all the good they do for the health of our planet, what’s not to love about trees? Yet, so many people still treat them like disposable products, no different than anything else you’d throw away without thinking twice. Call me strange but I still look at trees like friends. I like them all. Sure, I get the fact that they are a renewable resource (for the most part), and we need and use products made from trees every day. I’m no different. Yet I still get a pit in my stomach every time I pass a logging truck loaded down with giant hardwoods stripped to their trunks. I think about the forest from which they came. After years of peaceful growth, offering food and shelter to creatures great and small, and nutrients to the soil while scrubbing the air and returning pure life sustaining oxygen to all—in a matter of seconds, it’s over. 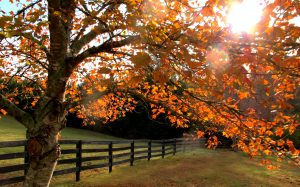 So I guess I just don’t get the folks that don’t quite “get” trees. They plant them too close to the house, or under a power line, and then spend the rest of the tree’s now short life fighting it from being a tree. What a shame. And what about the companies that made persistent herbicides used for killing weeds and undergrowth? The chemicals are so potent that when taken up by tree roots, it kills them dead in short order and there’s nothing that can be done once it happens.

So this episode is an updated homage to trees, and my way of using our voice in defense of trees and hope for a better understanding and appreciation by all. Although originally filmed for season two, expect something on this subject of tree care just about every year. If this episode looked familiar, we used some of the same material, especially the segment about tree topping. It may be my biggest pet peeve. Beyond that though, I hope to educate viewers to a better way, such as by using a Certified Arborist to help make the right decisions about how to care for trees.

You may be interested to know that episode was shot over a two-year period and incorporates every season. It’s also the only one that we’ve filmed so far while it was actually snowing. Not ironically, as we started filming this episode in 2011, some of the trees we featured were cut down within months, as a result that tree topping had on their far too early demise. I guess as long at there’s tree topping and people that just don’t get trees, I’ll continue to be a voice in their defense.

To watch the entire episode online, go to Episode 405 – Trees Are Good.