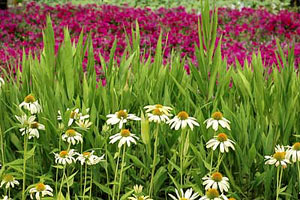 Perennials, as opposed to annuals, come back year after year

Here is a questions I fielded recently:   I finally know what a perennial is, but now I’m hearing terms like ‘Herbaceous” and “Woody” perennials. Now I’m starting to get confused again. How many kinds are there, and what’s the difference?

And, here is my answer.  Perennials are classified as either Hardy, Herbaceous, Semi-woody, Woody, and Tender. Here is a brief explanation of each:

Hardy…These perennials will tolerate frost. However, there are varying degrees of cold a hardy perennial can handle. A perennial that’s hardy in Georgia may not be hardy in Wisconsin. So, be sure perennials you purchase are hardy in your zone.

Herbaceous…These are plants that die back to the ground at the end of the season. It does not mean the plant is dead, however, the foliage above the ground is. The roots are not, and will put out new growth the following season. Most garden perennials that we buy are herbaceous.

Semi-woody…Although not as woody as a shrub, these perennials do form a woody base and stems. Lavender and Rosemary would be good examples.

Woody…These are shrubs or trees. They don’t die after one season, assuming they’re planted in the right zone.

Tender…These are perennials that can’t be overwintered outdoors except in tropical or sub-tropical regions. Usually these plants are grown as annuals. A good example of this would be coleus. In Florida, these plants may grow year round outdoors, but would die in colder climates.