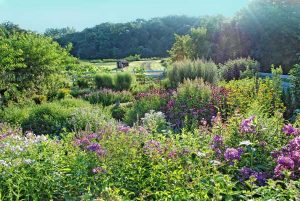 As we near the finish line for a series of episodes that have taken us coast to coast, I thought I’d have a little fun with the crew. This time we were headed to Decorah, Iowa to feature Seed Savers Exchange’s 35th anniversary conference and campout. The annual event draws hundreds of attendees. Many choose to camp right on the property. And why, not? It’s beautiful! So when I briefed my crew on our sleeping accommodations for this outing, I told them they too would be camping, sleeping under the stars and soaking in the experience of this historic event. They were not amused.

When I finally told them I was kidding, they expected to get the good news that we’d be lodging in accommodations similar to what they’ve become accustomed to over the previous 19 episodes. They’ve become quite spoiled. But this was a very busy week in the small town of Decorah. With limited choices for lodging, there were no rooms at the inn, or anywhere else for that matter. The few hotels in and around town had been booked for months. When I broke the news that that we’d be staying in nearby college dorms, and finally realized I wasn’t kidding, they were shocked. 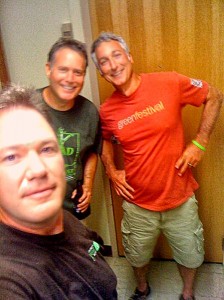 The boys in the dorm....dejavu!

When we pulled up to the Luther College student union to pick up our keys, the reality of their fate finally set in. “Miller Tower, forth floor” the polite young student assistant said. “Your packet of linens and towels should be in the room. The men’s shower is on the fifth floor. And be sure to take your key, otherwise you might get locked out,” he shouted as we darted for the car. We thanked him and headed straight to Wal-Mart to purchase shampoo and soap. The toiletries weren’t part of the deal we learned. While there we picked a few other essentials of every college dorm room: beer, ice and a cheap cooler. Leonard also bought flip-flops for a dollar. (Those were for the public showers).

With no Internet access, cell phone coverage or television, everyone retired to their plastic mattresses by 9:PM. Just as well though; crew call was 6:30 AM the next day.

I could tell from the looks on their face, the first night of sleep didn’t go so well. “Morning boys and Patti” I said. “How’d you sleep?” I tried to sound upbeat and optimistic, hoping to set the tone for a positive response. None came. “I didn’t sleep a wink,” grumbled Carl. “I need coffee,” muttered Patti. “We need to find a hotel, tonight!” barked Leonard. I could relate to every response. It was not the best of nights for bringing our “A game” to the set.

Yet in spite of the night from hell, we had a great day. With such an important story to tell, and an all-star lineup of on-camera guests, we were psyched to chronicle their 35 year journey and rise to national prominence at a time when now, more than ever, the world needed to learn more about their collective mission of protecting, preserving and passing on heirloom and endangered seeds and plants.

A favorite image from that day

By the end of the day, we had successfully worked our way through about half of the story and along the way, we all came to realize that whatever creature comforts we thought we were missing, vanished amidst our enthusiasm and excitement of being there to experience this event and further their mission of sharing such an important endeavor. With another full production day ahead, we were obviously tired, ready for bed and anxious for a good nights sleep. This time, the plastic mattress just didn’t seem as bad. And besides, back at the dorm, we had air-conditioning and the beer had been on ice for 24 hours. We slept like babies.