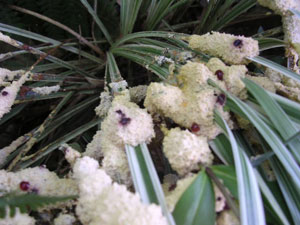 Slime mold looks more noxious than it is

Things are not always as bad as they seem. So is the case with “Slime Mold” in this example, embedded within a stand of Silver Dragon Liriope. As nasty as it looks, Slime Mold is rarely a problem.

Slime molds are commonly found on ornamental plantings, lawns, mulches and just about anywhere in the home landscape. They are most often observed during warm, wet conditions. They can appear in a multitude of colors as well, including white, yellow, orange, red, brown, or any shade in between.

As bad as Slime Mold looks, it is harmless to plants and turf. The mold feeds on bacteria, fungus and decaying organic material. The most damage you may see is a slight yellowing of the leaf or blade area due to the mold blocking the surface from getting light.

No treatment is necessary. If the unsightliness is bothersome, then rake out the mold or spray it off with a stiff stream of water. However, it will usually turn black and disintegrate on its own within a few days.