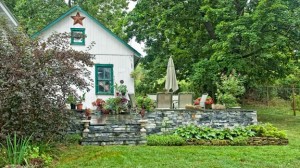 As luck sometimes goes, the much needed rain fell on our shooting day at Suzanne's home

Having just come off an incredible day of shooting less than 24 hours prior at the Rodale Institute, we were ready to ride that wave for another productive day taping of our next show. But it wasn’t to be. Our assignment was to shoot most of episode 124, dealing with natural pest control with Suzanne Wainwright-Evans at her fabulous farmhouse just outside of Allentown, PA. Suzanne is an expert in ornamental plant entomology and she’s fascinating to listen to when talking about her favorite subject: bugs. (Be sure to listen to my podcast conversations with Suzanne here and part 2 here)

Unfortunately, our day started out wet, very wet. After such a gorgeous day for the Rodale shoot, this was a drastic contrast. But not to be deterred and always the optimist when hoping for a break in the weather, we proceeded to Suzanne’s house, undaunted. Ironically, the summer has been a particularly dry one in these parts with only two days of rain in three months…until today. 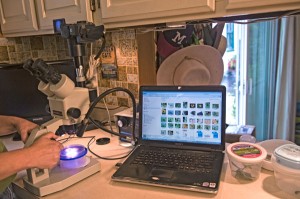 With a crew of six and no place to go, I was getting antsy by 9:AM. It normally takes at least a full day to complete a show, usually longer. So naturally, I was ready to “shoot “ something. Fortunately, part of what we were showcasing this day was Suzanne’s home laboratory where she shares her kitchen counter with a laptop and high-powered microscope. Here, she conducts all kinds of bug observations and captures their behavior with hi-resolution photos and videos. For the uninitiated, it might seem like an odd site to invite so many bugs into your kitchen. But for Suzanne, it was just another day at the office, literally.

If we could have made an entire show out of bug videos, we would have. We certainly had enough footage. But in the interest of telling the story we had laid out in the script, this kitchen scene was only a small part of the episode. And the rain kept falling. Throughout the day, I wrestled with when to start shooting the rest of the show, if at all, assuming the rain never stopped. Although we had planned on using the following day to complete the final part of the episode before departing to the airport, it now appeared we’d be taping nearly the entire show in record time…assuming it stopped raining. 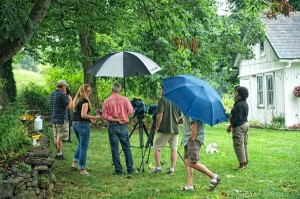 Unwilling to settle for grey skies, less than exciting visuals, and the sound of raindrops hitting overhead umbrellas as we tried to “make it work”, I opted to forego shooting anything else this day. It was a risky move. By putting all our chips into the following day, I was assuming it wouldn’t be raining and everything else would fall into place. It had to.

Once the decision was made to wrap shooting for the remainder of the day, things got better. No, it never stopped raining. But with nothing else to do, we enjoyed the company of our crew and hosts. We were treated to a fantastic meal served from the grill thanks to Suzanne’s husband, William, and accompanied by good wine and plenty of laughter. The day had turned out to be quite a success after all. And as things always do, the following day worked out beautifully. We were able to complete every part of the script, just in time to race to the airport to catch our flights. Episode 124 was in the can, along with another great memory of life on the road for our Growing a Greener World crew, season one.