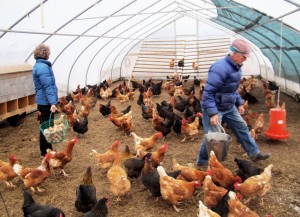 Whenever we set out to tell a story for Growing a Greener World, we look for the very best place to do so. That means going to the most perfect locations, and finding the people best qualified to advance the subject. So when we lined up two living legends in one location at their nationally recognized Four Season Farm, I knew we were going to have a stellar show.

Eliot Coleman, likely the most famous four-season gardener on the planet, and Barbara Damrosch, revered author of one of the best-selling gardening books of all time, The Garden Primer, are the husband-wife team that run this well-oiled machine in Harborside, Maine.

This was the first episode of the year for season three. And when you’re filming 26 new gardening shows a year, waiting until spring to start shooting, is not an option. So, where do you go in January to film gardening shows? Well, Florida would be a good option. But we did that in our fist season and it really didn’t work out so well. The week before we arrived, they had a 50-year freeze that wiped out most of their vegetation we were coming to film. 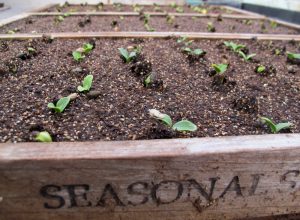 Yet along with age comes experience and wisdom. No longer rookies, now we don’t try to dodge the weather, we embrace it. This time, we faced winter head on, and embraced the challenges of trying to extend the harvest season in a place far less hospitable then the state 1500 miles to the south. And yet, it’s been an unusually warm year, even in Maine.

Packed for potential blizzard conditions, I was willing to take one for the team. Just for the record, I am NOT a fan of cold weather. Yet for the sake of an edgy show and one that was certainly different, I had geared up mentally for this trip for weeks. Yet during the two days on location, all that was needed to stay comfortable outside during filming was a single fleece coat. This was supposed to be a show about facing the elements head-on, in brutal, unimaginably cold weather—and succeeding, while inspiring viewers to do the same. The message: if they can grow food in Maine during the dead of winter, we can do it anywhere by golly!

It’s O.K through. Although we really needed snow on the ground and red drippy noses to set the scene, we still had a great visit with Eliot and Barbara. The information was just as good and always amazing to hear and see if from the masters. 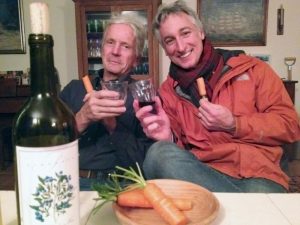 After a successful couple of days and my first ever taste of surprisingly delicious blueberry wine (harvested from the farm), we had one last scene to shoot back in North Carolina. Eliot is a big fan of low tunnel hoop houses for over-wintering many of the crops they harvest throughout the coldest months. And we wanted to show viewers how easy they are to make at home. So weeks later, we filmed the segment to show just that.

In television production, visual continuity is very important. And even though we were clearly in a new location, seasonally it needed to look the same to carry this story of winter gardening. So I wore my winter coat and long sleeve corduroy shirt that I had on in Maine. The segment went well and our low tunnel hoop house looked great during the making and finished product. The only glitch was that on this day of shooting, the temperature was in the 80’s, even in mid-March. I was burning up and nearly got heat stroke! I think I’m becoming more of a cold-weather fan after all.

The episode we shot at Four Season Farm will premiere mid-July, 2012. Currently episode 301, but things change!