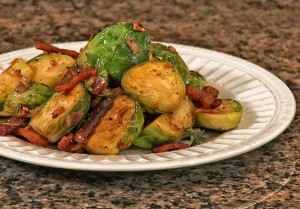 On a small sheet pan, add the pecans and roast until lightly toasted, 8 to 12 minutes, stirring after 5 minutes to prevent burning. Remove from the oven, and allow to cool. In a large saute pan, add the sliced bacon, and turn the heat to medium. Cook, stirring occasionally, until nicely colored and most of the fat has rendered off. Pour off half of the bacon fat, and reserve for another use, or discard. Meanwhile, bring a medium pot of salted water to a rolling boil. Trim, and discard, the bottoms off the sprouts and remove any yellow leaves. Add the sprouts to the boiling water, and cook, approximately three minutes. Drain. Carefully (hot!) quarter the very large sprouts, and half the medium and small sprouts. Add the diced shallots, thyme, black pepper, and Brussels sprouts into the saute pan. Cook, stirring occasionally, until lightly colored, 3 to 5 minutes. Stir in the vinegar, then chop the pecans, and add to the pan. Stir to combine. Season to taste, and serve.