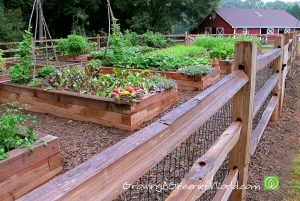 Exactly one year ago, I moved from a small-town, small-yard urban neighborhood, to a not-so-small farm, equestrian community in suburban Atlanta. In my previous garden, the biggest threat was our small flock of free-ranging chickens getting to my cherry tomatoes before I did. Beyond the ubiquitous squirrels, and occasional raccoon, I never had to face the challenges of unwanted critters invading my garden.

Fast-forward to now and I live in a suburban wild-kingdom. The first day we drove onto the property, a family of deer taking their afternoon siesta scattered from the overgrown shrubs in front of the house. About the only thing missing from this property are lions and tigers. So you can imagine the challenges facing a gardener like myself, with ambitions of living off the land and creating a beautiful landscaped paradise.

Until now, I’ve never really had to plan my gardens with a strong deer-defense in mind. But here, that wasn’t an option. They are all around us every day. A garden loaded with tender tasty greens and vegetables is like candy to a baby. It’s no secret, deer will stop at nothing to get what they want. So as I built my garden (and posted the progress on social media channels), it surprised many that the perimeter fence created to protect my precious edibles was only four feet tall. It’s a well-know fact; an obstacle this low is merely a bunny hop for these voracious animals. Commenter’s to my posts wasted no time scolding and chuckling at my deer fence, while offering their best wishes at defying the odds stacked largely against me. Yet I had a theory that I wanted to test before resigning to a taller barrier.

Just as deer can easily jump over a fence twice the height of mine, they don’t like jumping into crowded, confined areas, or into places where they can’t perceive a clear landing area. My garden consists of many large raised beds, with little room between them and the fence, hence creating that confined space feeling I was hoping would deter the deer from using my garden as their personal buffet.

The other part of my theory was reducing the attractiveness of my garden from outside the fence line through scent. It is widely agreed that scent-based repellents are an effective, albeit temporary deterrent to deer and certain other creatures. I was anxious to put my idea to the test using Milorganite, a natural, nitrogen based fertilizer that also has the reputation and added benefit of acting as a repellent to deer. Although you’ll never find anything about it’s deer-repelling properties on their label since that’s not what it’s made to do, gardeners around the country have attributed their reduction in deer browsing to this product. Even some university studies have noted its effectiveness in reducing deer damage.

My not-so-scientific method for testing this part of my theory was to amend all the raised beds with Milorganite, knowing I was providing organic nutrients to the soil while hoping its scent would serve as a deer deterrent too. Well, two-thirds of the way through my first season in my bountiful garden, and I’m happy to report that all is well. I’ve harvested many pounds of fresh vegetables while never seeing the first signs of animal problems inside the garden.

Time will tell, but if history is any indication of the future, then I’m bullish on many deer-free gardening seasons ahead.